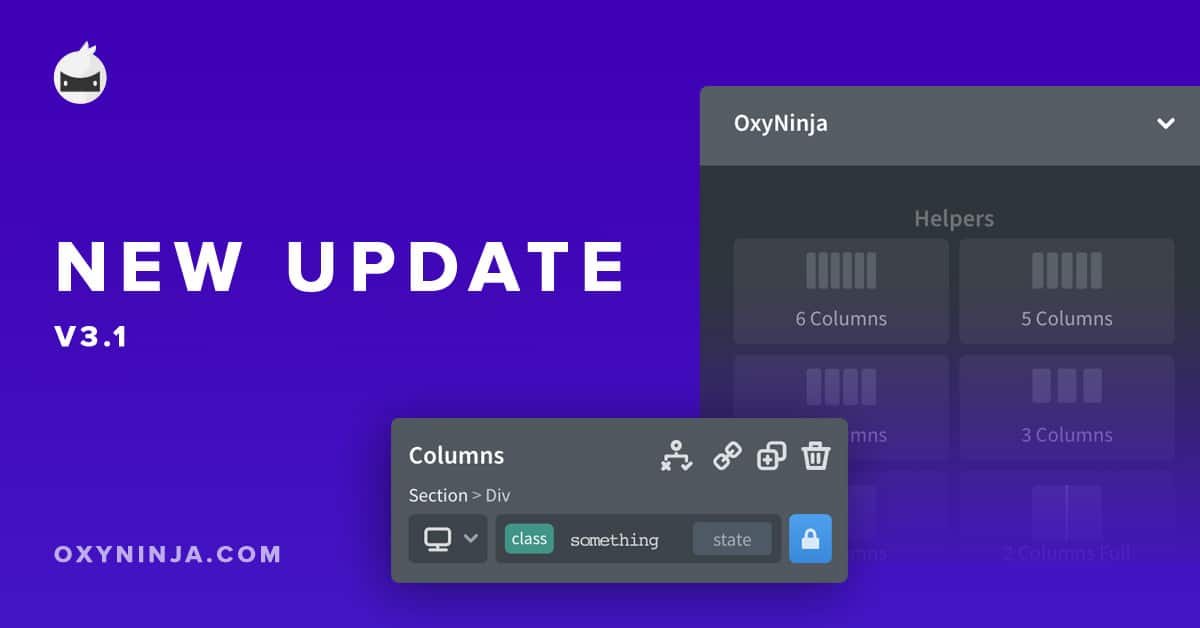 Check out the interactive cheatsheet or print for later!
Cheatsheet

The new version of the OxyNinja plugin (3.1) has just been released to the public, and brings several new features and fixes some bugs from the previous version. The update is important for both Core and WooCore.

It’s one of the most important updates so far, as it also brings the Auto-Update from the WP dashboard, which will make it easier to streamline future fixes and updates.

Let’s have a quick look at the new release:

There were also some small bugs fixes in the meantime, and CSS fixes were pushed both to Core and WooCore design sets. I am not announcing these little updates as they may happen quite often and they do not need a plugin update.

Note: You may see the error of missing plugin.php file after update from the older version. This is expected and you can ignore it.

Let’s have a look at details of new features.

This one is big. It adds it’s own fancy OxyNinja section in the +ADD panel. Now you can add premade columns of the Core classes which are already pre-set. It has a gap and classes to stack on smaller breakpoints.

You can quickly add columns and save some time in your workflow again.

In the next update, we will also add more advanced grids and will keep this feature growing with more layouts.

These helpers are not taking the component resources from Oxygen, as they are not made as native components.

Note: If you do not see any helpers there, make sure you have updated to the plugin version 3.1 and you have added the plugin license key which you can already see in your member area

Did you ever start doing changes to your element, just to realize that you accidentally added unwanted properties to the utility class which broke your other elements? Now you can lock your elements so next time you select it, it auto-selects the ID, and classes stay locked until you unlock them.

Normally, when you have a class selected and nothing is locked, you can see the green LOCK icon near the class selection field. This signalizes that you are editing a class.

If you want to lock that element, click the LOCK icon. It will become blue, which means that it’s locked to the ID. Now you cannot select the Core class, because it auto-selects the ID. To unlock it, just click the LOCK button again. It’s simple. You still can edit your own classes or other classes that are not from the Core framework

When you go to your purchases & downloads in the member area, you will see a new OxyNinja License Key. Download the new plugin, and install it to your WordPress, copy the license key, and paste it in the WP Dashboard to Oxygen > License > OxyNinja. This will activate Auto-Updates, so you don’t have to download the plugin every time the update is made.